As the sun was rising on another long, gruelling, hot day in Dezhou, China, Ben Wareing tried to stay upbeat and focused on the task ahead: finishing building an entire house, from the ground up, with just 10 days left to go in the Solar Decathlon.

And not just any house — a “net zero energy” home, designed to consume 80 per cent less energy than a traditional home and to produce enough energy through solar panels to power the home for a year.

So, not a simple summer project.

“It’s extremely well-insulated. It’s airtight. We have high-performance doors and windows,” said Wareing, a McGill PhD student and the architecture lead of Team MTL, the only Canadian team in the competition.

“We’ve been very careful with the design of the orientation of the home.”

The team hopes their design, inspired by both Montreal row houses and traditional Chinese siheyuan courtyard architecture, will be enough to beat out 21 other teams, all made up of university students.

The team designed and built in Montreal, before disassembling and shipping to China in pieces. They say their modular design makes Team MTL’s home special among their competitors. 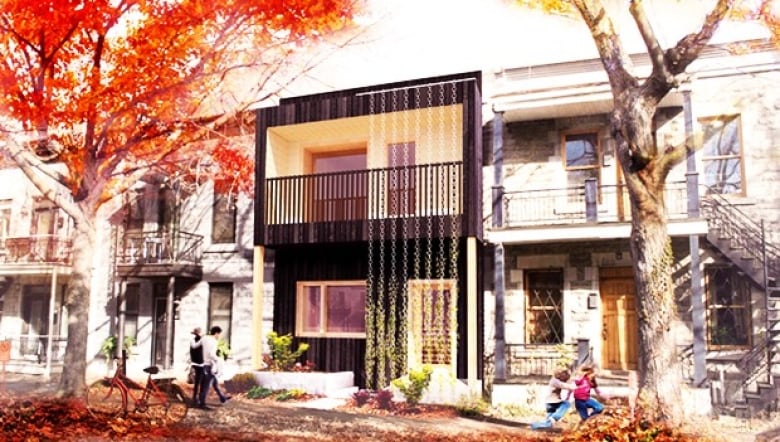 Rémi Dumoulin, a masters student in engineering at Concordia and the engineering lead for the project believes its design also includes “more innovative” features to store energy produced by solar panels.

“Say, that the electrical grid is already producing more power than it needs at a given time of the day. We can offset that moment … and sell back to the grid when it really needs the energy back,” said Dumoulin.

He believes homes like this could “in the near future” be commonplace on the streets of Montreal, as the technology becomes more affordable.

The long, narrow house, has a courtyard dividing it into two units, designed to give the occupants some flexibility in how they want to use the space.

“It could operate as a granny flat, or an Airbnb rental, or a live-work space,” said Wareing. “It was very important to us to ensure that the home remains relevant throughout its life and that it could adapt to the needs of its dwellers.”

No tools for 4 days of competition

The team has had its share of setbacks, between the 40-degree heat, a torrential downpour that came at an inopportune moment, and a customs issue that left the team without tools for the first four days of the competition.

“The shipment was held up. There were a few layers of bureaucracy to negotiate,” Wareing said.

“That was quite traumatizing,” he added with a laugh.

In the end, fellow teams came to their aid by lending them equipment until their shipment came in.

“It’s just such an adventure for us,” said Dumoulin.

“We’re still going to need a big push to get there,” said Wareing. “But we’re about on track.”

Ben Wareing & Remi Dumoulin tell us about building an energy-efficient home from the ground up for the Solar Decathlon in Dezhou, China. 11:06