It’s big, cold, blue and 4.3 billion kilometres away. But astronomers using cutting-edge optics technology have taken an image of Neptune that is nearly as sharp as those taken from the orbiting Hubble Space Telescope.

When scientists and amateur astronomers take images of stars, galaxies, planets or any celestial object, their main adversary is Earth’s atmosphere. Temperature fluctuations and air density cause turbulence, making it difficult to observe and photograph clearly. That’s really why we see stars “twinkle.”

But VLT’s new features can adjust for this.

Four incredibly bright lasers project columns 30 centimetres in diameter into the sky that create an artificial guide star for the telescope to focus on.

The light of the star is used to determine atmospheric turbulence. The telescope then makes 1,000 calculations per second and changes the shape of one of its mirrors, correcting for the distortion. 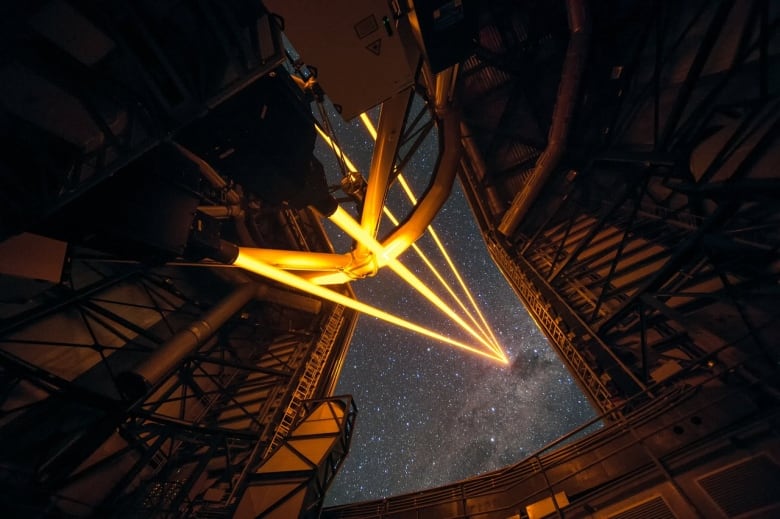 A look at the four powerful lasers that form a crucial part of the adaptive optics systems on the European Southern Observatory’s Very Large Telescope. (ESO/F. Kamphues)

This produces images nearly as clear as those from Hubble, which has no air turbulence to deal with because it’s above Earth’s atmosphere.

The European Southern Observatory plans to use the new optics to take a more detailed look at objects such as supermassive black holes, dense collections of stars called globular clusters and supernovas.

Watch the video below to get an idea of the difference between the wide-field mode and the narrow-field mode with the adaptive optics turned on.