Before you head to bed on Saturday night, you should remember to move your clocks forward, as Daylight Saving Time (DST) begins.

Though you may feel a bit groggier on Sunday after losing that hour of sleep, at least you’ll know that you’re gaining an hour more of daylight. It also serves as a reminder that spring — and the longer days of summer — are around the corner.

Some have recently called for an end to DST, citing how it can cause sleep disruption and really serves no purpose.

Though it was originally proposed as a way of conserving energy a 2008 study in the U.S. showed that it may not necessarily be the case, finding there is a “tradeoff between reducing demand for lighting and increasing demand for heating and cooling.”

How it came to be

The concept of DST was first raised by entomologist George Hudson in 1895, who wanted more daylight hours to study insects.

It was raised again in 1905 by Englishman William Willett (the great-great-grandfather of Coldplay frontman Chris Martin) in 1905 who proposed it to Parliament, though lawmakers had yet to take to his idea when he died in 1915.

A little known fact, however, is that Port Arthur — the Ontario town that became part of Thunder Bay — first used DST in 1908, after passing a bylaw.

But Germany was the first country to adopt DST, on April 30, 1916 — in the middle of World War I — in an effort to conserve electricity. Just a few weeks later, the U.K. also adopted the practice. However, after the war ended so, largely, did use of DST.

Standardized in the ’60s

In Canada, whether to follow DST is a provincial matter, unlike at first, when its use varied from town to town.

Regina implemented the time change on on April 23, 1914, followed by Winnipeg and Brandon, Man., and eventually Halifax, Hamilton, Montreal and St. John’s.

DST was used on-again, off-again through World War II. It was standardized across the U.S. in 1966 when Congress passed the Uniform Time Act, and Canada soon followed suit.

But even today, not all of Canada observes DST. In Saskatchewan, unless you live the border town of Lloydminster, you stick with Central Standard Time. And some regions in Ontario, Quebec, British Columbia and Nunavut also don’t observe DST.

You may have heard that Benjamin Franklin first introduced the concept of DST, but that’s not entirely true.

In a letter to the editor of the Journal of Paris in 1784, Franklin suggested that Parisians could save on candles by getting people out of bed earlier in the morning. The only thing was, he was joking. 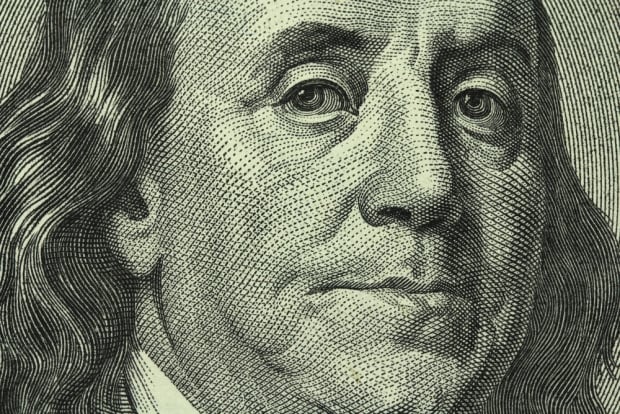 Benjamin Franklin, whose likeness now adorns U.S. $100 bills, wrote about the concept of daylight saving in a 1784 essay. (Fablok/Shutterstock)

The rest of the world

According to timeanddate.com, less than 40 per cent of countries around the world follow DST. China and India don’t follow it, and Russia dropped it in 2014.