Step into Blizzard Entertainment’s Overwatch League studios, and you’d never know you’re about to watch a bunch of 20-somethings get paid to play computer games.

But this is 2018. A sports spectacle is exactly what watching a bunch of 20-somethings getting paid to play professional eSports looks like.

For almost 40 years, the biggest attraction at The Burbank Studios in California was The Tonight Show.

Now, about 15 minutes outside of Los Angeles, these television studios are where millions of eyeballs — much younger ones — are focused every week, soaking up the newest eSports league to hit the scene: The Overwatch League. It started hosting regular pro games in January. 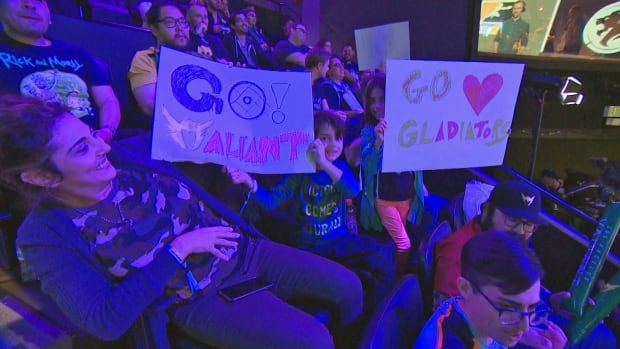 Kids hold signs and cheer on their teams at the January Overwatch League game between the Gladiators and Valiant. (Ousama Farag/CBC)

“There’s a real tradition and history here of entertaining people,” says Rob Moore. He spent years building movie franchises at Paramount before becoming manager of the L.A. Gladiators, a professional team in the Overwatch League.

He gestures across the studio. It’s a massive space that looks a bit like the setting of a TED talk, with stadium seating for about 500 people facing a main stage.

But instead of empty space for a single presenter, there are 12 computers lined up — all facing the crowd — each station equipped with web cameras so spectators can see the players’ faces as they play.

Overhead, there are giant, wall-sized monitors primed to show various angles of action within the game. 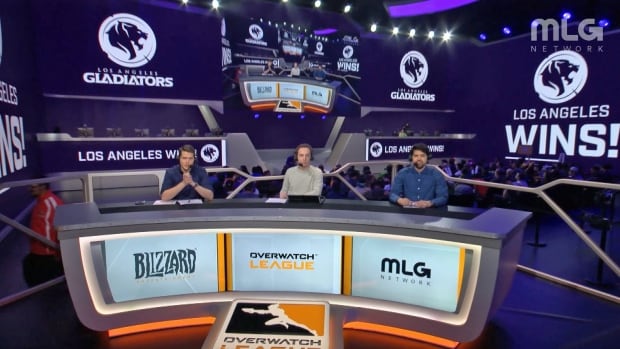 Behind the scenes, a team of dozens carefully choreographs the live broadcast, instant replays, and analyst playbacks.

“When you sit in this arena, the energy in the room, you’d have no idea what sport you were watching. The crowd, the level of engagement, their reaction to a great play — it’s like watching any sporting event,” Moore says.

Indeed, from the long admission lines and the security screening, to the array of pricey merchandise, and even the zig-zag of snack vendors in the stands, a live game of Overwatch has all the hallmarks of any other traditional, professional sporting event.

If you’ve never seen the game before, the action’s admittedly hard to follow — but during the Overwatch League’s opening week in January, an estimated 10 million people tuned in.

At its core, Overwatch is a fast-paced, team-based first-person shooter.

Each side has six players, and depending on what level you’re on, there’s a different objective. For example, one team might be trying to escort a payload through a city street, while the other team tries to stop them.

According to Blizzard Entertainment, the game’s developer, 35 million people play this game.

What has arguably given the game a broader appeal than many other shooters is the sprawling universe in which it’s set.

There are more than two dozen playable characters — a Japanese assassin, an American cowboy, a Mexican hacker, a robot monk, a genetically-engineered gorilla — and each character has their own backstory.

That diversity of gender, culture and race may be why major companies like Intel, HP and Toyota are comfortable investing as league sponsors. Even restaurant chain Jack In The Box sponsors a team.

“People under 30, they’re becoming next to impossible to find and communicate to, and here’s a place they’re passionate about,” Moore says.

“If you can connect your product into that world, there’s the opportunity to really connect with a young audience.”

Calgary-born Lane Roberts, 23, is a member of the L.A. Gladiators. In-game, he goes by the name “Surefour.”

Soon after Overwatch was released in 2016, he began climbing the game’s built-in competitive rankings. 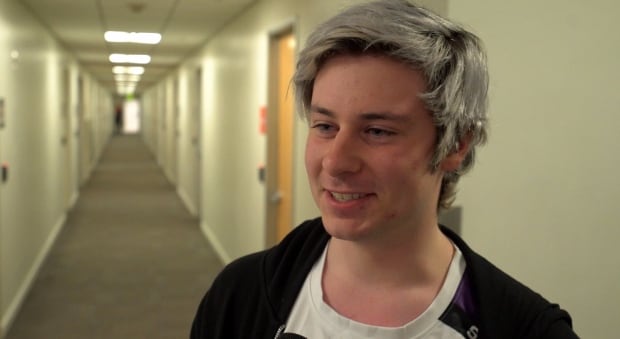 Calgary-born Lane Roberts, 23, is a full-time player with the L.A. Gladiators. (Ousama Farag/CBC)

Within the first season, he was ranked No. 1 in North America. That put him in good stead when it came time to build a team to represent Canada at the Overwatch World Cup, a Blizzard-backed event showcasing the highest echelons of talent in what was, at the time, a nascent game.

Ultimately, Surefour (Roberts says his alias doesn’t signify anything — it’s a random remnant from his days playing games on XBox Live) would help propel Team Canada past 30 other countries to a second-place finish.

“I never had the goal to become an eSports player,” he says. “It just sorta rolled out that way.”

The Gladiators huddle with their coach David Pei, second from left, to get last-minute instructions before a match. (Ousama Farag/CBC)

Surefour has parlayed that “roll-with-it” attitude into a full-time job playing Overwatch competitively. He gets paid a salary. With benefits.

His team pays for the house he lives in, and there’s a chef who cooks up a lavish dinner six nights a week.

Sure, he lives with four teammates and his head coach — but that has more to do with building a cohesive unit than scrimping on accommodations.

The head coach plays the role you might expect: someone who cracks the whip, runs plays and builds strategies.

There’s also another coach who focuses on the mental game.

The Gladiators have a daily coaching and game-review session to go over performance and strategy. (Ousama Farag/CBC)

“So maybe they stonewall, and all of a sudden they don’t want to talk about anything,” explains Blake Panasiewicz, the team’s performance coach. “Maybe one of their common things is to shift blame: ‘It’s not my fault,’ it’s always someone else’s fault.

“I make it so you can perform better,” he adds.

Teaching team social skills and stress management is a big part of Panasiewicz’s domain, but he’s also a stickler for eating well and getting exercise.

Enforcing the latter, he admits, can be a challenge. 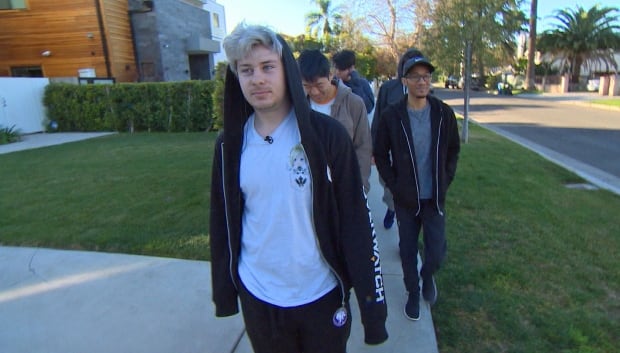 Roberts, front, takes a daily walk with his team to get some exercise and time away from screens. It’s mandatory, part of a routine set out by his performance coach. (Ousama Farag/CBC)

These are, after all, 20-something gamers. They sit at a computer half the day, fueled by a steady supply of Coke Zero and instant noodles.

“Pretty chill,” Surefour says about the life he’s carved out for himself. He has time to chat about it while on his team’s mandated 30-minute morning walk.

“We are playing video games for a living, so it’s kinda like a dream job in a way,” he admits.

But it’s still a job?

“Yeah, that’s where the stress comes in … it’s definitely hard. It’s not easy. And if you ever think it’s easy or there’s no point to it, I challenge you to try and do what we do.” 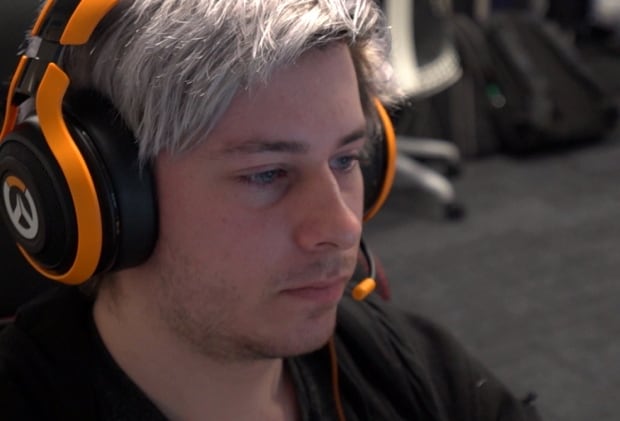 As a pro gamer, Roberts gets one day a week off during the Overwatch League’s season. (Ousama Farag/CBC)

It varies, but Surefour and his team can spend up to 10 hours a day sharpening their skills, reviewing game footage, and discussing strategies.

They officially get one day off a week. But even during leisure time, you can often find them playing Overwatch — sometimes for a live audience on a streaming service like Twitch.

As for why so many people pay for the privilege of watching Surefour tap, click and flick his way across a virtual battlefield, the Gladiators’ team manager Moore puts it this way: “I see it as the people who are the best in the world at something. There is a level of commitment and skill that is on display.”

I ask Surefour how much he gets paid to showcase such skill: “Safe to say you make a six-figure salary?”

He laughs, and with a smirk, says simply: “I make a good amount.”

Surefour is just one of 113 of the best Overwatch players on the planet, representing franchises from 12 cities around the world.

They’re based in Los Angeles during these first two years of the league, and all games play out in front of a live audience at The Burbank Studios.

In future years, the idea is for each city to develop a local venue; think along the lines of Rogers Arena for the Vancouver Canucks, or the Air Canada Centre for the Toronto Maple Leafs. 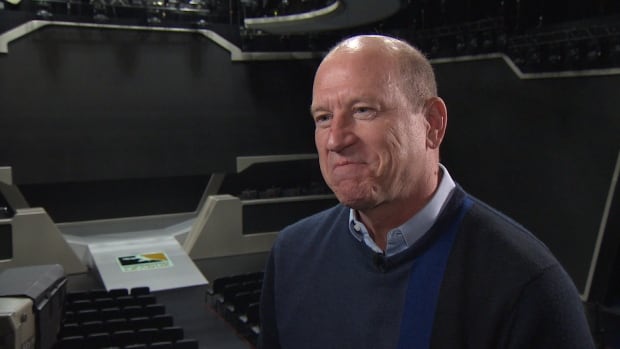 Rob Moore, seen here at the Overwatch League studios in Burbank, Calif., is bringing his years of experience building movie franchises with Paramount into play to manage the L.A. Gladiators. (Ousama Farag/CBC)

And despite the fact Overwatch is generally played online, the league wants its teams meeting face-to-face. So every game a team plays will either be a home or away game.

That would make for a lot of flying.

“There is no [other] sports league in the world where Shanghai plays Los Angeles in the regular season,” says Nate Nanzer, commissioner of the Overwatch League.

“That happens in our league.”

Across eight months of the year, there’s a preseason, regular season, playoffs, finals — even an all-star weekend. 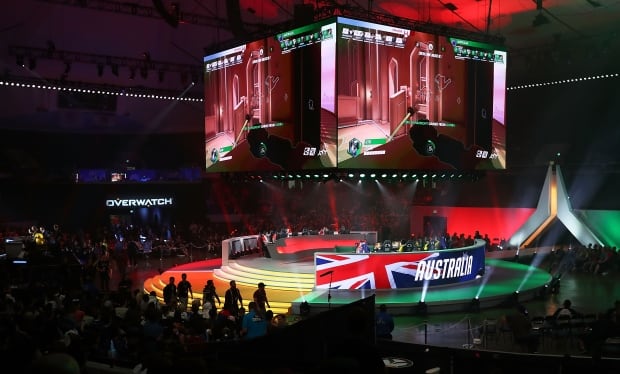 Team Canada takes on Team Australia during the Overwatch World Cup at BlizzCon 2017 in the Anaheim Convention Center in November 2017. ( Joe Scarnici/Getty Images)

There’s $2.5 million US in prizes up for grabs through the season. And the grand prize for being on top when it all ends: another $1 million. Then the whole thing starts all over again.

The format is nothing new — but the profit potential is. Even the established kingpins of traditional sports recognize it.

Consider this: Robert Kraft, the owner of the NFL’s New England Patriots, owns the Boston Uprising Overwatch team. The Kroenke brothers, owners of Arsenal FC and the L.A. Rams, own the L.A. Gladiators.

What this is not, however, is a get-rich-quick scheme. 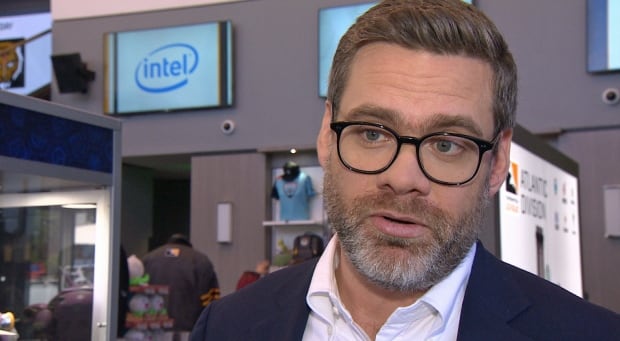 Right now, at $20 US a pop ($30 on Saturdays), ticket sales are a drop in the revenue bucket. Neither the additional merchandising, nor broadcasting revenue, are enough to sustain the league.

It’s sponsorship money that keeps this boat afloat, big names who want their brands attached to the eSports phenomenon. And it’s through the guarantee of stability that the Overwatch League hopes to build stronger relationships.

In the Overwatch League, teams have two-year contracts — an eternity in the world of eSports.

The league also has the all-in backing of Blizzard Entertainment, one of the biggest game developers in the world.

It remains to be seen just how big eSports can become, and whether the Overwatch League is the right vehicle for that growth.

It’s a gamble, but Nanzer is keen to point out that there’s momentum — a natural inertia from fans, pushing the industry forward.

“If you spend any time at all with any kid in North America who is between the ages of nine or 10 and high school, all they do is watch YouTube, watch Twitch, they watch these things,” he adds. “And what they’re doing is they’re watching other people play video games … it’s an incredibly common thing.”

Nanzer sees the league getting bigger, and he has Canada squarely in his sights.

“Toronto, Vancouver, Montreal — those are all cities that are really, really interesting, and are ones that we definitely have our eyes on for future expansion.”